What Does SEER Mean? 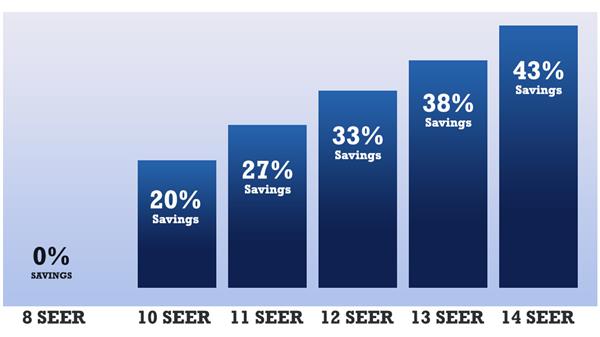 What is a SEER Number? What is an HSPF Number?

If you are shopping for a new HVAC system, you’ll encounter two acronyms and associated numbers that you may not be familiar with: SEER and HSPF. SEER stands for Seasonal Energy Efficiency Ratio and is a value that ranks a system’s efficiency in cooling. HSPF stands for Heating Season Performance Factor, and it’s commonly understood as a comparable score for a unit’s efficiency in heating during cold weather months.

What is a SEER Number?

Older HVAC units may have a SEER number between 8-10. Currently, the minimum SEER value is 13, which means replacing your unit will instantly improve efficiency and lower energy consumption costs (consider usage remains constant).

The SEER number listed with an HVAC system is always the maximum efficiency, which means the unit is capable of reaching that efficiency, but that it may not always operate at that ratio.

What is an HSPF Number?

The Heating Season Performance Factor, commonly referred to as HSPF, is a heat pump’s efficiency rating. According to Energy.gov, the HSPF is the “total space heating required during the heating season, expressed in BTUs, divided by the total electrical energy consumed by the heat pump system during the same season, expressed in watt-hours.” In essence, it’s a SEER rating for your heating in winter.

Like older AC systems, heat pumps older than 10 years likely have an HSPF number lower than 7.7, which is the current minimum. A system with an HSPF number over 9 can drastically improve efficiency and lower monthly heating costs.

SEER Matters Most in Myrtle Beach

Since we have more hot weather than cold in Myrtle Beach, South Carolina, we tend to work our cooling systems more than our heating systems. As a result, consumers should be more concerned with the cooling efficiency of a unit than the heating efficiency, since the system will spend a majority of its time cooling.

SEER numbers on new HVAC systems range from 13 to 20+. The higher the SEER number, the more efficient the unit will be. While high-efficiency systems with large SEER numbers cost a premium, they can offset their costs with lower monthly cooling costs. Considering how much we rely on air-conditioning in Myrtle Beach from Spring-Fall, a high SEER rating can be worth it in the long run.

SEER and HSPF numbers are not the only thing to consider. It’s important that your unit is properly sized for your home or business. In many ways, this is a more important consideration as a unit that is too small for your square footage often leads to mechanical problems from the strain of trying to cool too large a space.